Xiaomi has finally rolled out its Mi Band 6 in China. The smartwatch has got considerable updates in design as well as performance than the previous Mi Band 5. Mi Band 6 comes with an SpO2 sensor to track down the real blood pressure, heart systolic and systolic movements and also the results are quite accurate and precise.

What is the Price of Mi Band 6?

Mi Band 6 starts with the Price of

What is the Launch Date of Mi Band 6?

Mi Band 6 has been already launched in China on 29th March. Mi Band 6 pre-order has also started in China. Also, Mi Band 6 will go live on sale from 2nd April in the country. Xiaomi has not yet officially announced its launch in India but seeing the previous trend the smartwatch will soon feature in India.

What are the Specifications of Mi Band 6?

Mi Band 6 comes with a 1.56-inch Full AMOLED display which is around 50% larger than the previously launched Mi Band 5. Xiaomi has given this smartwatch a pill shape looking quite similar to Band 5. The display screen resolution measures 152 × 486 with 326 PPI that enhances the display performance. The AMOLED display offers great immersive and vivid visuals with a clear crystal look.

Mi Band 6 has good really thin bezels all around giving the watch a more professional and attractive look. Its maximum brightness can reach upto 450 nits hence providing great outdoor visibility. The smartwatch is water-resistant and can survive in the water for as deep as 50m. The 1.56-inch smartwatch display comes with tempered Glass which is smudgeproof. Mi Band 6 is available in 8 color variant of Black, Blue, Brown, Green, Orange, and yellow color options.

The smartwatch has got SpO2 sensor to track real-time blood oxygen-level with heart-rate monitor for 24×7. Not only that, it also tracks your breathing quality via REM tracking when you are sleeping. It has got 125mAh battery and company claims that it can survive upto 14 days on standby with a single charge. The battery ecosystem of the Mi Band 6 is similar to its predecessor Mi Band 5.

Mi Band 6 smartwatch features 30 fitness modes adding 15 new modes which is somewhat double of the previously launched smartwatch. The fitness tracker can automatically detects 6 tracking modes which includes walking, treadmill, cycling, ergometer, elliptical, and rowing. The smartwatch has got around 130 watch faces which is customizable according to the user’s preferences. 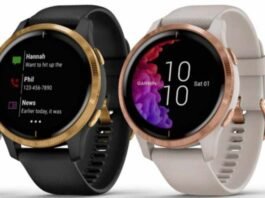 Garmin Venu 2 Plus Smartwatch goes Official in India- Here are...