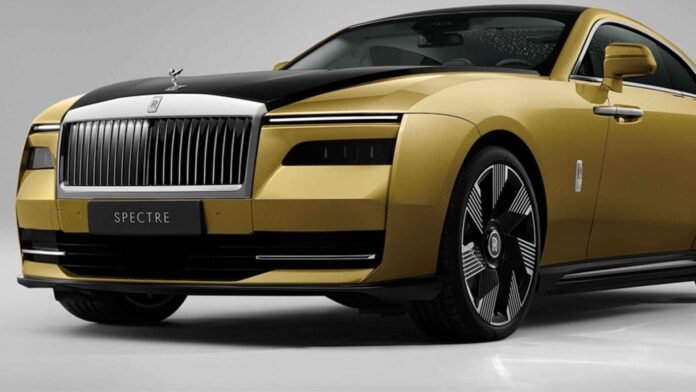 The Rolls Royce Spectre makes a bold statement. The starlight roof and wide, flat sides are all designed to create a sense of speed and aerodynamic efficiency. The car also uses electric motors to increase efficiency and reduce fuel consumption. Its exterior design and styling have been influenced by a yacht silhouette.

Rolls Royce Spectre is a statement of intent

The Rolls Royce Spectre is the company’s first pure electric vehicle. Launched today, it’s a statement of intent for an electric future. With 577 horsepower and two electric motors, it can go from 0 to 60mph in 4.4 seconds, and will reach a top speed of 155mph. The company has promised that all its models will be electrified by 2030.

The Spectre’s appearance harkens back to the classic Rolls-Royce shape, with its tall bonnet and fastback tail. The car is Rolls-Royce’s first entry into the EV market, and Rolls-Royce Motor Cars says it heralds the arrival of an all-electric era and a new standard for the Ultra-luxury Electric Super Couple class of automobiles. The company says the car was built with electrification in mind, and that it underwent the most thorough testing to ensure it was ready to serve its customer needs.

It looks wider and lower

The Rolls Royce Spectre looks wider, lower and longer than its predecessors, but its styling is also more aerodynamic. It features an illuminated front grille and a longer bonnet than previous Rolls Royces. It also features two LED headlights and thinner day running lights. Rolls Royce has said that the new Spectre is the ultimate ultra-luxury super coupe, and it shares many styling elements with the discontinued Wraith coupe.

Its design is more dramatic than ever, with sharp fender lines and bodywork defining sharp peaks. Its new two-toned bodywork also creates more dramatic shadows. It also uses the same new aluminum platform as the current RR. The Spectre is 16 feet long and 6.6 feet wide.

It has a starlight roof

If you’re in the market for a luxurious two-door sedan, the Rolls Royce Spectre has the features you’re looking for. It has a starlight roof and two doors and is larger than an SUV. It will cost somewhere between the Phantom and Cullinan SUVs and will have a starting price of $327,750. In addition to its design elements, the Spectre will have a lithium-ion battery-powered architecture. This hybrid-electric car will have an estimated range of 260 miles and will have a price tag to match.

The new Rolls Royce Spectre has adapted the company’s Architecture of Luxury platform to accommodate fully electric powertrains. Its battery is integrated into the vehicle’s structure, which makes for a smooth underfloor and lower seating position. The battery also acts as 1,543 pounds of sound deadening, meaning passengers will enjoy a quieter interior.

The new Rolls Royce Spectre is the first full-electric model, and it will be available in the fourth quarter of 2023. The company hopes that by 2030 all of its vehicles will be electric. The Spectre shares a design and styling similar to the Wraith coupe, but it is not related to it. It uses the company’s all-aluminum Architecture of Luxury, and it will be the first Rolls Royce to use electric motors.

Although Muller-Otvos declined to give sales targets for the Spectre, he said the company sees EVs as a natural evolution for Rolls. He noted that the company’s brand is synonymous with smooth rides and quick power, and he hopes to have an all-electric lineup by 2030.

It has a Planar suspension

The Planar suspension on the Rolls Royce Spectre gives this luxury car the ability to read the road ahead and decouple the front and rear anti-roll bars. This technology improves the ride quality, reduces the amount of vibration and impact transmitted to the driver, and improves comfort.

The engineers at Rolls Royce have over two decades of experience in the design and development of luxury cars. They worked on the first ‘Goodwood-era’ Phantom, and they have since taken on the project of developing the Spectre. They say the Spectre experience is Rolls-Royce in high definition. It responds to varying road conditions and climatic conditions around the world.

It has a sound-deadening battery pack

Unlike most other electric cars, the Rolls Royce Spectre is not very noisy, thanks to its sound-deadening battery pack. The car’s body is made up of all-aluminum construction, which makes it 30% stiffer than its predecessors. Engineers have also built the battery pack into the Spectre’s structure, which is a key aspect of reducing noise.

The Rolls Royce Spectre’s massive battery pack helps to improve the weight distribution in the car, which dampens cabin noise. This means that the car uses less sound deadening materials than its predecessor, the Phantom.