What is NFC? For What It Stands for, Its Usage, Full Form, NFC Tag Reader!!! 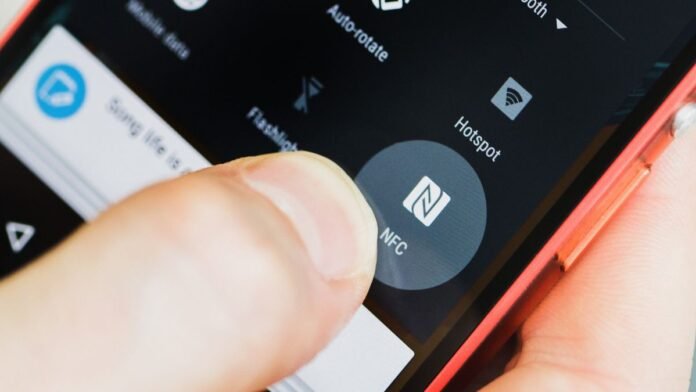 NFC, or near-field communication, is a set of protocols that enables electronic devices to communicate. This type of communication can occur over a distance of about four centimeters. It offers a low-speed connection, which is sometimes used as a bootstrap for more capable wireless connections.

NFC technology can be used for various applications. It has three modes of operation: reader/writer mode, card emulation mode, and peer-to-peer mode. Each mode offers different functions. In peer-to-peer mode, two devices exchange data in order to carry out a transaction. In this mode, any device can be the initiator and the other can act as the receiver.

The active device can read the data stored on the NFC tag and can transmit it to another device. For example, a smartphone could serve as a keycard for an office building and open doors automatically. Similarly, a smart card could be used to make payments or store purchases. By connecting to an NFC reader, a smartphone could access information from the smart card.

NFC can be used to send and receive data in a variety of ways. A typical NFC application uses a message called NDEF. This message consists of multiple records, each with specific definitions. The NFC Forum and NFC Standards body have defined several RTDs (Record Type Definitions) that are commonly used in NFC applications. The message also contains header fields, which list control information. In addition to the header field, the payload field contains data that is specific to the application.

One of the most important features of NFC is its ability to transmit data. When a pair of NFC-compatible devices are connected, the data is transmitted instantly. It uses Manchester coding with 10% modulation. This mode is used for speeds of 212 to 424 kbit/s. For higher speeds, NFC technology uses the active mode.

Near Field Communication (NFC) technology has the potential for a multitude of applications. It can be used to pay for goods, access hotel rooms, and more. In addition, NFC-enabled mobile phones are expected to allow users to update social networking sites and upload health data to hospital monitoring systems. The success of this technology will lead to further advances in other areas.

While the NFC system has been designed with security in mind, it may still have holes. Some attacks are based on a lack of encryption. This technology is still relatively new, so security researchers are still looking for ways to make it more secure. Luckily, there are several methods that can help improve security.

One way to improve NFC security is to modify the logic of Wi-Fi and Bluetooth pairing. The logic used for these connections is important, as special characters can trigger security vulnerabilities. Another way to improve the security of NFC is to follow NDEF specifications. This means avoiding special characters. This will make it easier for developers to create secure applications for NFC.

As the supply of NFC devices grows, hackers will find new exploit kits and exploits. As a result, security should be a top priority in NFC technology development. While the high interoperability of NFC standards is vital to its adoption, these technologies need to be properly secured. The best way to do this is by implementing appropriate mechanisms to protect data.

One method is by implementing an authentication process for NFC payments. This requires users to set up a password on their devices. This helps prevent unauthorized access to the NFC device. Another method is to use a PIN. If this method is used, it should be encrypted. In some cases, NFC is a good solution to protect sensitive data, but it still has its own limitations.

While NFC technology is relatively new, it has many applications. It can be used to control devices like smartphones, locks, and doorbells. It can also be used to provide location-based services. For example, NFC-enabled smart rings can be used to direct people to the location of a business.

NFC devices can connect with other NFC-enabled devices. NFC-enabled devices are often seen on commercial store signs and bus stops. These devices can send information to other compatible devices, allowing customers to view movie trailers, read consumer reviews, or find out more about a product. Other applications of NFC technology include contactless payments. In addition, NFC-enabled smart posters can help consumers find deals and promotions tailored to their location.

NFC can also be used to transfer files between smartphones. NFC-enabled smartphones automatically form an NFC connection when they are close to each other. To transfer data, the two NFC-compatible devices alternately generate an RF field, which transfers data to the recipient smartphone. Once the file is transmitted, the recipient smartphone stops generating the RF field and receives the file. When NFC devices are near each other, data can be transferred at speeds of up to 424 kbit/s.

NFC also offers a safe and secure authentication method for companies and consumers. This ensures that users and companies can feel confident about their purchases. NFC technology can also be used for anti-tampering and product verification. It also provides an additional layer of security that many consumers value. As more technologies become interconnected, consumers have high expectations for their interactions with these devices.

NFC is also compatible with a variety of devices. These devices have different communication modes, which affect how they work and what they can do. There are two main NFC modes: peer-to-peer and reader-writer mode. The former is the standard for NFC communications between two NFC-enabled devices, while the latter is compatible with contactless IC cards.

NFC supports secure transactions and is currently being used for loyalty programs, payments, and transit passes. Apple’s new iOS platform claims a more secure method of data encryption than Android. NFC applications can also bootstrap other wireless networks. Bootstrapping allows NFC devices to connect to another wireless network without requiring a high-speed connection. It is also used by the Android Beam app, which uses NFC to establish a connection between two Bluetooth devices. Once the transfer is complete, NFC disconnects the connection.

The cost of an NFC or RFID system depends on several factors, including the size and complexity of the system, the components used and the casing design. For example, a small-sized device could cost less than a few cents. But a large-scale project would probably cost more than that. The costs are also affected by regional differences. For example, the cost of developing an NFC system in North America will likely be more expensive than the same development in another region.

One of the biggest costs of an NFC system is the cost of NFC chips. Although they are relatively inexpensive, they require programming to be effective. An NFC chip requires a specific action to be performed and this programming can be expensive. Moreover, there are no bulk encoding solutions, which makes it difficult to implement an NFC system in large scale campaigns.

Another cost factor is the implementation of strong cryptography. In order to install strong cryptography on an NFC device, manufacturers must upgrade existing NFC devices. This is not an affordable option for most users, especially for smaller devices. It would also be inconvenient for those with limited budgets. Ultimately, NFC technology needs to be inexpensive to be widely adopted in everyday products.

NFC was never intended to be a luxury good. The cost of producing and packaging an NFC tag is still too expensive to be a worthwhile investment for the average consumer. But once production volumes and production speeds match the market’s expectations, NFC will become mainstream. The technology can be used on everyday products in the near future.

NFC has many uses beyond payment. For example, it can be used for marketing campaigns, loyalty programs, and other services. It is also used for contactless payments in retail environments. And a new NFC implementation may require installing point-of-sale systems and customizing the tags.